Review: The Business of Being Born 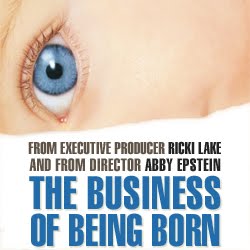 My friends love babies. Like, really love them. Sending each other pictures of various babies we know is a pretty common occurrence. I actually attended the 1st birthday party of my friend's baby sisters earlier this year. My friends love babies so much that all-things baby-related are also a fascination. We held a screening party for the premiere of Lifetime's The Pregnancy Pact and a lot of them watch Teen Mom (I cannot handle that show), and I have been at parties (like, you know, college parties) where I have ended up discussing the politics of breast feeding. Babies are a thing.
So my friend Keiran suggested that we watch The Business of Being Born, which is a documentary about the birth industry and how it works against the natural, home-birth movement. Babies and birth kind of make me nervous, so I am not always into the baby mania, but I have to admit, birth is pretty interesting. And from a feminist perspective, it's kind of a complicated thing. So a bunch of us got together and set out to watch some babies get born.

I first became really aware of the fact that people had home births in a women's studies class I took sophomore year. We did a unit on birth and the professionalization of the birthing process, and that midwives, mostly women, were locked out of conducting the births of babies to make way for the "professional," male doctors. (Ladies couldn't be doctors in the early 20th century.) In reality, many of these doctors had never seen a live birth and getting a birth done in a hospital was a lot more dangerous than getting it done by a midwife.
Fast forward to today. Less than one percent of all births are done in the home. Midwives are less expensive than going to a hospital in many cases, and are just as safe and better as long as the birth is normal.
I'm not going to lie, birth kind of grosses me out. I know it's cool, but it's also very messy, and that gets me. I'm not a bodies person. The documentary does show live births, and despite the grossness, it's really cool. One of the births shown is a woman in a small blow-up pool in her house, and aided by her midwife, the baby just pops out! We were all amazed. 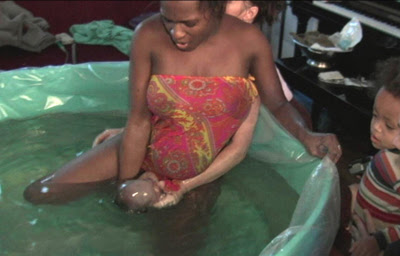 fwoop! OMG BABY!
Ricki Lake produced the film, which she got the idea for after her second child was born naturally and at home. The footage of the home births were pretty funny, actually. Women make some weird noises when they're in labor. One of the funniest births was footage of the main midwife in the movie, who admits that she was not the "ideal patient" even though she'd had so much experience on the facilitating end. The director, Abby Epstein, was actually pregnant during the filming, and planned to have her baby born with a midwife as well. However, she went into labor 5 weeks early and the baby was breech, so after calling the midwife, they decided to go to the hospital.
One of the points that I thought was really interesting was that the United States has the second highest infant mortality rate among developed nations, as well as one of the highest rates of maternal mortality. And the nations with the lowest rates of both have really high percentages (30%-70%) of home births. Clearly there's something to this home birth movement. Birth in a hospital is important for irregular births where there is actual imminent danger to the baby's or mother's lives, like in Abby Epstein's case. However, home births make sense. They just don't contribute to this huge industry of pharmaceuticals and insurance and doctors that make billions of dollars each year.
There are several other points made in the movie that make home birth sound really so much more pleasant and healthy for mother and child development. I really recommend this movie, it's great!
Posted by Liz at 10:10 AM